I’m working the The First Ladies of Baseball to come up with predictions for how well the Nats will do in May. They’ve got the first half of the month up at there blog here.  I’ll have the second half around midday tomorrow. We’ll compare notes at the end of the month. 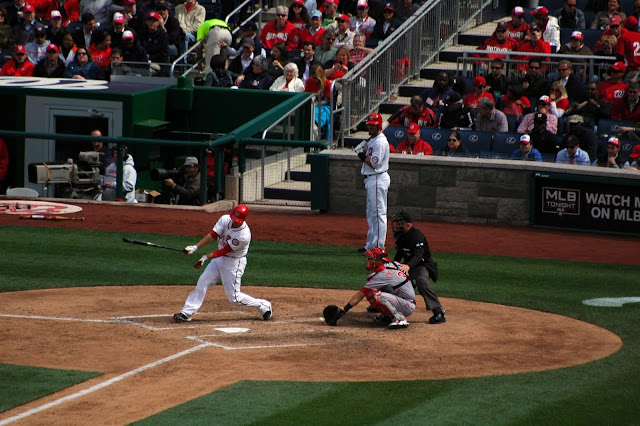 In my post last week about opening day, I mentioned the Nationals were playing at their Pythagorean Winning Percentage (PWP).  For those not familiar with the idea, it states that a team’s winning percentage is a function of runs/points scored and runs/points allowed. Truly earth shattering stuff I know.  For baseball, the function is generally given as:

That gives you a winning percentage which can be compared with a team’s actual W/L record.  Teams that have a better W/L record than the formula predicts are considered lucky with opposite also holding true.

The Nats and Dodgers are way over performing their expected totals. I’ve got a feeling that Nats fans can expect to see some regression to their actual abilities here in the near future.  One thing to note is that the Nats have benefited from a somewhat soft schedule and will continue to do so.  To date, the Nats’ opponents have a record of 30-44.  And while it is still early, the Nats will play only 1 team currently above .500 (the Dodgers) through May.

Don’t get me wrong. I’m excited the Nats are performing well enough to be around .600.  Lord, I’d be so excited to have a 90 win team this year. But I’ve got a feeling you’ll seem me refer to them as the Natinals for a little while in May and maybe June.

The Nationals finally opened the 2012 season at home. The stadium seemed to be more prepared for a game than it did against the Red Sox two weeks ago. The opening day crowd was dominated by Nats fans which is always nice.  The crowd on Friday largely stayed through the 9th which was especially encouraging. 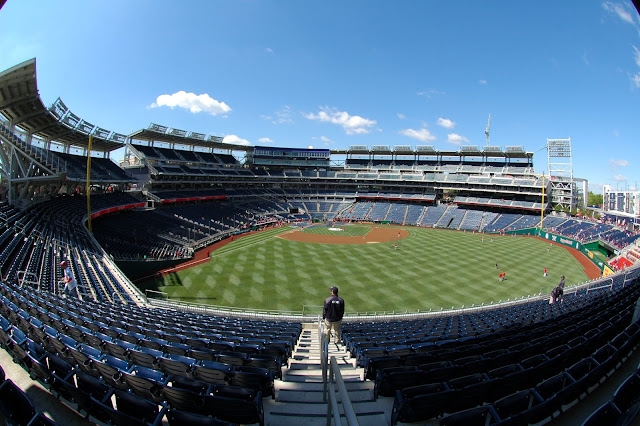 To call National’s Stadium a “lyrical bandbox” is a disservice to bandboxes everywhere.  I wish I could say the Nats have a stadium full of charm and character but it doesn’t. It is, however, excellently designed for one thing: watching baseball.  What it lacks in gourmet restaurants and other amusements, it makes up for with excellent views of the game (for those in doubt, see these photo albums all taken from the stands). While the pundits and developers debate the future of the area around the stadium, fans get to actually enjoy the game in an unadulterated fashion.

Beyond the excitement of drinking cheap beer (quality not cost), enjoying the spring weather, and avoiding work, what does one say about a 5% of a season? While the Nats are considered an up and coming team this year, how well they will do is unclear. As of today, they sit at 7-2. They’re playing at their Pythagorean winning %, which is encouraging but an 9 game sample is too small for judgments to be made. Our pitching has be enclose to if not completely dominant. 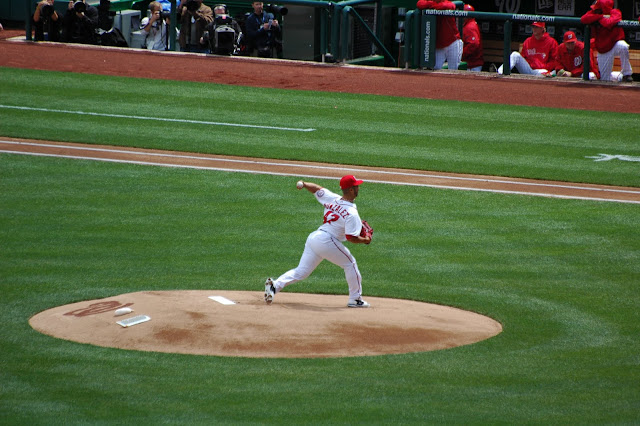 Gio Gonzalez’s first home start showed as much promise as his debacle against the Cubs did doubt.  Strassburg has also been meeting expectations which warms any true Nats fan heart. On the offensive side, Michael Morse is being missed but the Nats continue to score enough to win. We’ve been getting production across the board with Bernadina and Espinosa being small outliers.  This series with the Reds has been a good one for Jayson Werth (6 for 14 with an excellent walk off single).  If he keeps this up, the fans may actually come to like him. 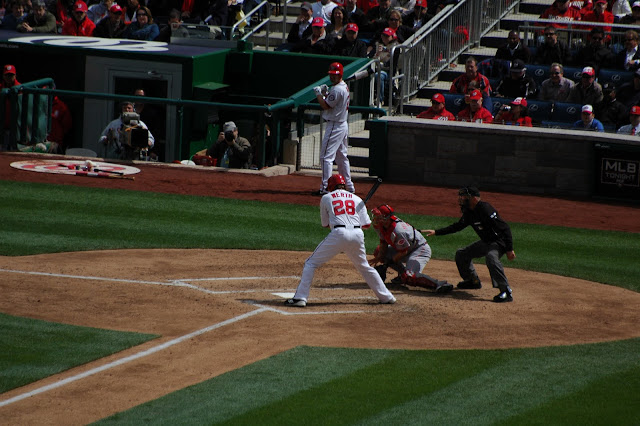 Yet, Nats fans are constantly looking over the shoulder, scared to be optimistic that this is year. Playing .500 baseball would be nice but the extra playoff spot has many of us hoping and wishing that the Nats can play beyond the end of September.  The Phillies and Braves haven’t fallen apart. More than likely they’ll be back on top by the end of May. The Mets are currently winning  but no one expects that to last. And then there is the question mark that is Miami.  Personally, this will be the year.  The Nats will break .500 for sure and, I believe, claim a playoff spot.  But then it’s still hard to have anything but hope when faced with 5% of the data.

I recently finished Mass Effect 3. Yes, I’m going to talk about the ending. No, I don’t think it was as terrible as people make it out to be.  I wanted to throw my two cents out there because, one, I can but two, to try and find some resolution to the ambiguous 3rd ending.  There will be specifics so if you’re the kind who doesn’t like knowing what happens, stop here and go finish the game.

A bit of background.  I played all three games. The first two multiple times. I keep my main character (Sheep Shepard) alive through the first two games.  All my crew survived the end of the second game.  I was generally a very nice person to everyone else in the galaxy (Kai Lan and the Elusive Man were the most notable exceptions).  I completed all the side quests and the DLCs.  Sheep, in essence, was the storybook hero.  Saving kittens from trees, trouncing the bad guys, being humble, making everyone love him. I have no idea how to play this game any other way. Tycho of Penny Arcade captured this feeling better than I can.  As a result, to say that I was invested in his success and the story would be an understatement.  I will freely admit to almost crying when Mordin died.  I loved seeing Dr. Michelle running the hospital.  Hell, I even enjoyed talking to the crazy reporter.  When the end of the game came round, I enjoyed saying one last good bye to my squad mates.

But then the ending came. I knew and wanted Sheppard to die. No sequels, no unending series (I’m looking at you Halo and Assassins Creed). Clearly I couldn’t destroy the Geth, who I’d worked hard to make the Quarins play nice with for 3 games to say nothing of the iron fox EDI. The Elusive Man’s plan was pretty repugnant so that was right out.  In the end, I chose the “synthesis” choice.   Sheppard jumps into a beam of light and then…….something happens. have no idea what.  There was a big green explosion.  I know I altered DNA and allowed organic and synthetic life to coexist. But that’s not a lot to go on.  I saw the Reapers pick up and leave. Why? Joker, EDI, and Liara got off the crashed Normandy.  Where did they crash? Can Joker walk because I made him part robot? Were they on earth? When the mass relays blew up, what happened to the Krogan, Turians, etc. that were on earth? Did they get stuck there? Are they robots too? What the hell happened?!?

I can’t speak to any of the other endings but I know this. The best endings strike a delicate balance between a vague future and a concrete present.  If Casablanca had ended with the plane taking off, it would feel unfinished.  If you never found out what Rosebud was, Citizen Kane would have been terrible.  If Frodo doesn’t return to the Shire, the books not as good.  If Luke doesn’t make it back to Endor, something’s left hanging.  Bioware did just the opposite. The made the future concrete but the present unclear.    They left me with no information about the galaxy that I had put so much of my own time and instead fed me a distant future where a grandfather spins stories about “The Sheppard”.  That is why it’s an unsatisfying ending.

Bioware doesn’t owe me anything in terms of clarification. I’m a little disappointed in them for talking about rewriting it. But they should know they came up short. No amount of DLC or rewrites will change that.